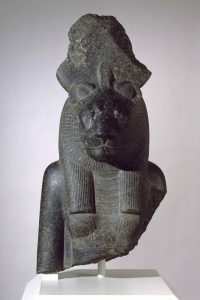 The bust of the Goddess Sakhmet was gosh-darned cool.Color: Seems to be comprised of some black stone. The particular luster it may have once had is likely not what the rustic remains portray.
Line(?): There are plenty of etchings on the bust to indicate the appearal worn by sakhmet. The bust seems to have been going for a general impression of the human body rather a realistic approach: perhaps implying simplicity for the sake of mass production or perhaps to keep Sakhmet from looking relatable.
Scale: The scale of the bust seems to be a good fit for a an ornament: meant to evoke the thought of Sakhmet but not as a center piece.
Sakhmet’s head is feline in appearance; I imagine this has something to do with Egypt’s culture. A lot of cats–a lot of felines.
Sakhmet is the daughter of the sun-god Re, taking on the role of ”The Eye of Re”: destroying the enemies of Egypt abroad. That is why I chose this work specifically: it was cool and I need a piece.
There is a big disk crowning the bust. Only a bottom portion of the disk remains. I would go so far as to say that perhaps the large disk crowning the ‘Eye of The Sun’ might perhaps just maybe be a representation of the sun
The patterns could represent ritual appearal. The face seems to be expressionless. The disk may have been used to tell the time–though that really is stretching too far. 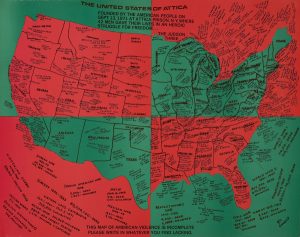 In the Soul of a Nation collection I chose ‘The United States of Attica’ by Faith RInggold to write about on this blog. It is a very powerful image.
Map is split into four quadrants, with the colors being inverted through a reflection in the x-axis. I suppose the this is to reflect the information written in each quadrant. This could also just be aestheticly pleasing; it is aestheticly pleasing but I mean only for that reason and not to reflect the information.
Since this is mapping out injustices suffered throughout America: I would imagine that RInggold had wanted to use the north American continent for the map–and she did.
RInggold created the map in tribute to the men who died in the police raid on the prisoner’s rebellion in Attica, New York. A revolt had occured regarding the conditions the prisoners had to suffer through. She must have felt that this incident would be thematically appropriate to bring together all the evil of the world–and relevant too. Hence the name ‘The United States of Attica.
It seems that the colors are in reference to a popular black nationalist flag from the 60s. Appropriate considering the context.
The fact that it is a map rather than a collection of clippings containing articles and texts about these events is a part of the appeal. The fact that it is in the form of a map gives the events that RInggold had listed a lot more impact and wieght behind their reality.