Final Project Details and Due Dates

For your final project you may choose one of three assignments:

Important Due Dates and Deadlines

Compile a bibliography of at least 3 online sources (smarthistory, the Met’s Timeline of Art History, museum websites) plus two articles (art magazine, newspaper, etc.) that relate to your topic. Once compiled, describe each source—what is it about—and what does it offer your project? How is it useful?

This is an annotated bibliography and should be posted by Dec. 10.

Due to unforeseen travel and logistical issues, I am afraid I have to cancel class Monday 11/12. I will see you on Wednesday 11/14. 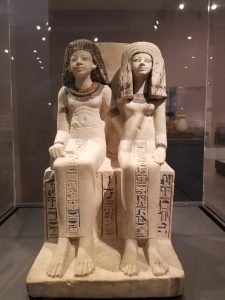 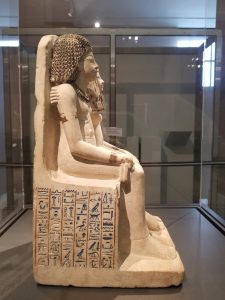 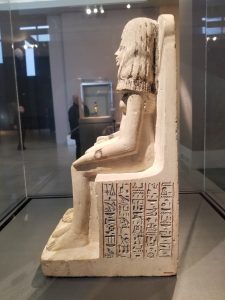 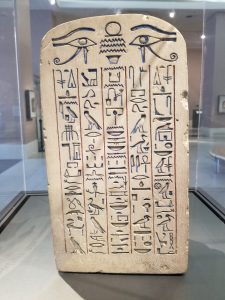 For Part I of the assignment I chose to dive into the Egyptian Art exhibition at the Museum. As soon as I saw the sculpture showed above I was interested to analyze this particular work of art which is called Pair Statue of Nelson and Never-ta. Using Formal Analysis I immediately noticed that the sitting couple is made out of Limestone. As I looked around I noticed that the bench where they are sitting on has writing all around it and not only in the bench but also in the persons clothing. This makes me think of the art work we saw in class and how sculptures from all other places in the wold also had writing during those times. This means that they all had their own language and similar ideas when it came to language. Their clothing and neckless have an appearance of people who are in high level society which made me think that they are a married couple from the royalty. What makes me come to the conclusion that they are married is that the are both have one arm being each other’s back and not only that but the artist made their arm unnaturally long and if looked closer on the sides they are holding each other with affection. Their body posture is stiff and everything seems alined. There is parallel lines in every section of writing. Furthermore this writing and the limestone is painter with different colors of blue, red, brow, and black. Furthermore the volume of hair in each person is large and it makes their faces look smaller, specially the woman whose face is smaller and has a larger neck. It seems that they both are wearing some sort of make-up in their eyes which makes those look bigger and angled. the size of the Sculpture is a small. I love what it represents and I love looking at it. Using formal made me understand in a deeper way what the sculpture represented in Egyptian times. 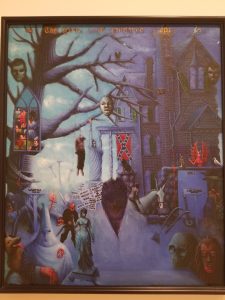 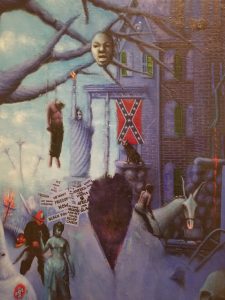 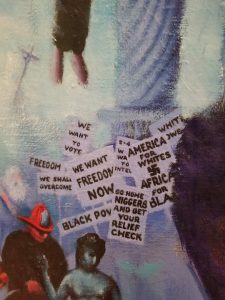 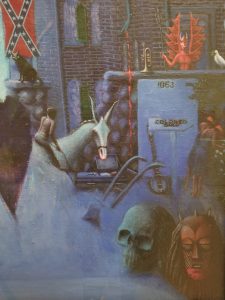 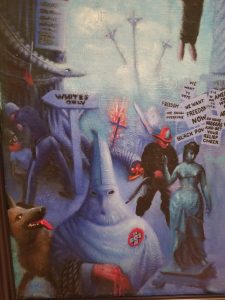 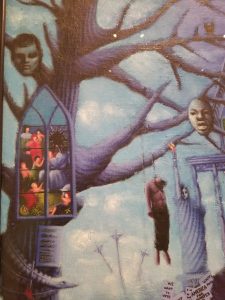 For Part II, in Soul of a Nation, after looking around the exhibit I found my attention to be caught under this amazing yet horrifying painting, The First One Hundred Years by Archibald Motley 1891-1981. As you can see in the pictures I took, the painting seems to be oiled based. Also the use of dark and cold colors is very mesmerizing because it helps the viewer feel what is going on. In the painting I feel that the artist wants the viewer to focus on the two faces that hang on the tree (Martin Luther King Jr.- J.F.K) and one from the house (Abraham Lincoln). Those are the faces of important activist and presidents of the United States. The main thing they all have in common is that they were all assassinated.  I chose these particular painting because it summarizes everything bad and wrong that happened during African American slavery and when the confederate flag was wave by the prosecutors and the “pure” white people. All this horrendous events took place under the times of those three individuals’s faces. To me the painting is very sad and scary. When I saw the painting,  it made me feel anger. To the whole exhibition this work of art in particular shows what African Americans had to go through before they obtained freedom. The Exhibition is about the Soul of a Nation, it has work of art that represent the time where Blacks resisted oppression, and the time where people made a difference. Basically the exhibition as a Then and a Now. The painting above is very powerful and meaning full and the way it was painted with different colors, scale and dimensions make the viewer to want to see it. After Motley concluded this work of art, he never painted again.

Hi all,
I’m sorry for the late notice but i had to go to the hospital this morning and won’t be able to make it to class. I’ll see you all next week!!

We will have a make up something to make up for this cancellation.

For Wednesday of this week, please continue to familiarize yourselves with the CUNY Academic Commons and then sign up for your class’s group on the Commons (this allows me to email you about assignments, reminders, etc.).

Also for 9/5, please write down your art story, per the schedule and assignments and post it using the Blog Post 2: My Art Story tag.