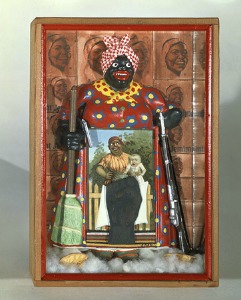 The Brooklyn Museum has many collections that one can view. These collections consist of Soul of a Nation: Art in the Age of Black Power, Syria, Then and Now: Stories from Refugees a Century Apart, One: Do Ho Suh, Half the Picture: A Feminist Look at the Collection, Something to Say: Brooklyn Hi-Art! Machine, Deborah Kass, Kameelah Janan Rasheed, and Hank Willis Thomas, Cecilia Vicuña: Disappeared Quipu,Rob Wynne: FLOAT, Infinite Blue, The Brooklyn Della Robbia, Arts of Korea, American Art, A Woman’s Afterlife: Gender Transformation in Ancient Egypt, European Art,Ancient Egyptian Art, Assyrian Art, The Dinner Party by Judy Chicago, Decorative Arts and Period Rooms, Visible Storage ▪ Study Center, Life, Death, and Transformation in the Americas, Williamsburg Murals: A Rediscovery and Steinberg Family Sculpture Garden. The collection that piqued my interest the most is Arts of Korea.

The Pair of Boy Attendants, Korea Joseon Dynasty is an art piece that stood out to me. This art piece The Pair of Boy Attendants, Korea Joseon Dynasty has soft lines, bright colors, and is a three dimensional statue.  The Pair of Boy Attendants, Korea Joseon Dynasty are usually called dongjas. These dongjas would be placed at buddist sculpture dieties to show that the donjgas are bringing gifts. While one of the boys is carrying a turtle the other boy is assumed to be carrying a tray of food. The colors primarily used in the sculptures are very light although if you look at the head and the feet they are a dark color. This contrasts with the white skin. The clothing on the statue is very detailed. When you look on the sleeve you can see the creases of the top, which makes it seem like that the shirt was a little too long or baggy. On the statue it’s very hard to see the turtle. It seems to blend in with the boys top. While the other boys tray does not blend in with his top that significantly it is the same color as the boys top. Both of the boys have very straight lines on their hands where you can see their fingers. The two boys have very faint curved eyebrow lines and ruby red lips which contrasts against their pale skin.

In the collection Soul of a Nation: Art in the Age of Black Power the art piece that captured my attention the most is “The Liberation of Aunt Jemima.” The reason that this art piece captured my attention is that when you closely look in the back there is Aunt Jemima who is the cover on nowadays pancake syrup. The painting consists of warm earthy tones in which each element of color varies and contrasts with each other. The woman with the very dark hues is shown bigger than everyone else.  In contrast to the big size the woman around her apron has a post card which shows a black lady holding a white baby. These colors contrast each other which makes the baby stand out. Jemima on one hand is holding a broom and on the other she’s holding a rifle. There are no soft lines in this painting rather it seems like the piece is just blobbed there.  The floor is white which brings out the earthy tones in the painting.  The larger Aunt Jemima has round eyes that are bulging out of her head while the red lip goes with the red dress.