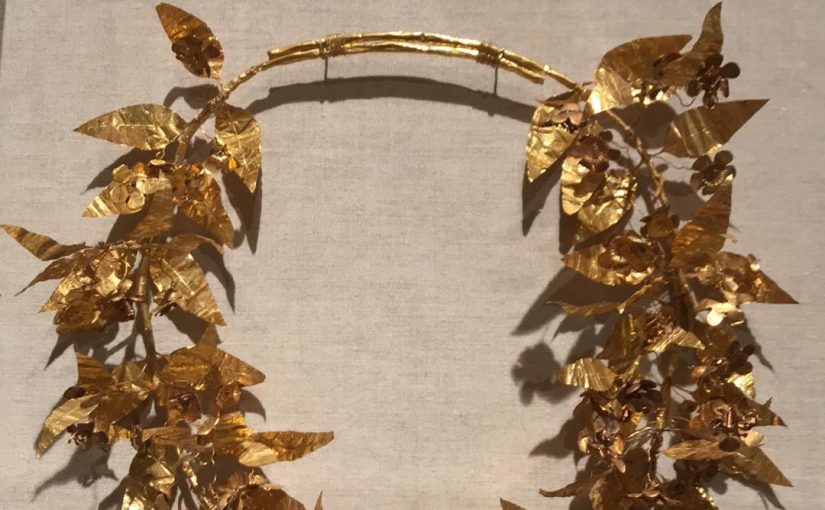 Part 1, Ancient Egyptian Exhibit:
When I walked into the Brooklyn Museum and went to the Ancient Egyptian Exhibit located on the third floor, I saw many interesting artifacts and ancient pieces of art work that had caught my attention. One thing that stood out for me and caught my eye when I was looking around the Ancient Egyptian Exhibit in the Brooklyn Museum was the Wreath. The Wreath was on display and it was a wreath made out of gold. It was a golden crown like ring surrounded with leaves and flowers which made it look like the wreath was a golden vine that was formed into a ring to fit onto someones head. The golden Wreath is said to have been from the Ptolemaic Period, circa third to second century B.C.E and a Gift of George D. Pratt. The golden Wreath is described to be “Formed to resemble flowers and leaves to crown athletic victors throughout the ancient Greek World.” These wreaths were used at lavish dinner parties and worn by the guests in the Egyptian capital, Alexandria, as explained by Athenaeus of Nitocris an Egyptian born Greek writer. The Wreath caught my eye because it had made me confused at first since I was visiting the Ancient Egyptian Exhibit and something Ancient Greek was among the collection.

Part 2, Soul of a Nation:
When visiting the Soul of a Nation located on the fifth floor in the Brooklyn Museum, there were many art pieces in the exhibit that could be related to modern art unlike the Ancient Egyptian Exhibit. The piece that stood out the most for me when seeing all the art works representing black power and the civil rights movement was the sculpture art piece Black Unity, 1968 by Elizabeth Catlett. I chose this piece because it can be related to society today with police shooting black people and black people raising their fists in the air yelling black lives matter. Out of all the pieces in the museum, the art piece Black Unity is like the center piece and relates to the rest of the artworks on display due to it being so meaningful in the era of the civil rights movement and also modern society. The piece seems to be made out of wood because of the wood grain look with a dark brown finish making the sculpture look smooth and waxy. The art piece is formed into the shape of a hand making a fist and the dark brown wood color represents a black person, so the sculpture must represent a black person holding up their fist. The dark brown wood is a mahogany which is a straight grained reddish brown wood which depicts the skin color. Visiting the Brooklyn Museum has been an amazing and enlightening experience which allowed me to learn more about both Ancient Egyptian Art and society and Black Art and Culture and I would definitely go back again with family or friends to see the exhibits again to learn more.