The art styles of Baroque and Renaissance has similarities but also many differences.  The Renaissance time period began about 1300 A.D. and the Baroque time period started immediately after at about 1600 A.D..

The main and major difference between the two genre’s of art is the formations of lines and angles within the piece.  Renaissance has straight and distinguishable lines while Baroque has curved and ‘messy’ lines.

This Renaissance piece “The Birth of the Virgin” (1467), is a good example of straight lines and posing.  The woman who just gave birth is posing in her bed and doesn’t seem natural.  The painting in its entirety seems to be a posed, stiff moment.  Even the baby, who is getting washed up, is standing straight and being posed.  This painting is very unrealistic and stiff. It almost seems like the body movements are fake.  The baby and children are deciphered as short adults. 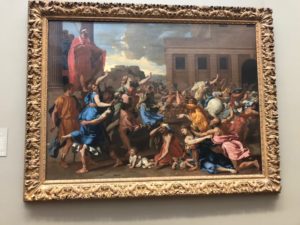 This Baroque piece, “The Abduction of the Sabine Woman” (1633-34), shows the drama and interactiveness of the Baroque period.  You can’t tell where one body begins and another one ends.  All the lines are curved, the hand, legs and bodys of the people are curved as if they are doing yoga while fighting or something.  The babies look and act like what they are supposed to be; babies. 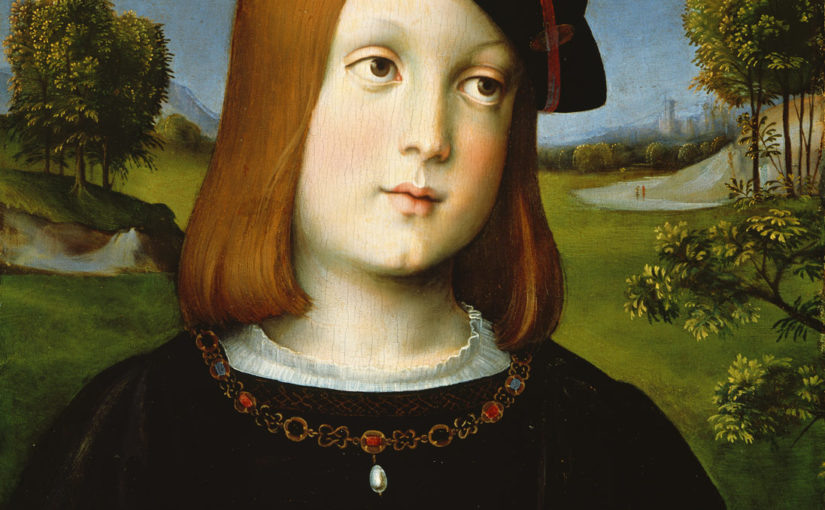 My experience at The Met was great. It was my first time going so I was very amazed by the greater amounts of work there was compared to the Brooklyn Museum. However it was a little overwhelming I only saw a small fractions of the art works in The Met. I will definitely go bacon a day where its not too crowed and i have more time on my hands so i can enjoy the experience more. 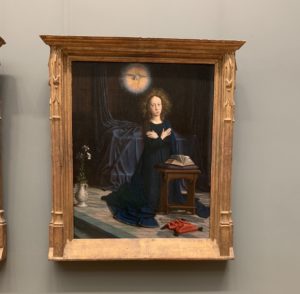 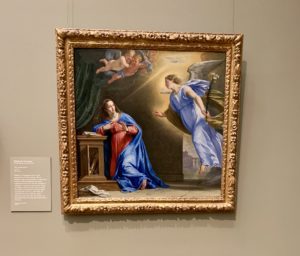 Both pieces of art depict The Annunciation which is when Archangel Gabriel told Virgin Mary she would conceive Jesus the son of God. From these pieces of art one can see how the art from the Renaissance appears to have more depth but has the stillness in the lack of emotion in the angel and Mary who both have straight faces. There is also dark cool colors with the exception of the red on the angle’s cape and yellow light beam around the dove. While the art from the Baroque era has warmer colors and more facial expressions on both Mary and the angels. The angel also has light beams surrounding him and is floating as opposed to the other painting where the angel appears to be standing on the floor. An other difference is that one painting is divided in two pieces while the other is just one painting. 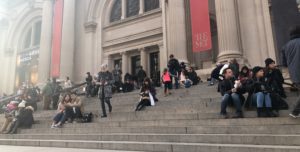 My experience at the MET museum was different than when I went to the Brooklyn Museum. The outside of the MET and was more striking. I was intrigued when I got there because of the size of it and the nice touch of the sprinklers outside. There was a lot of people there sitting on the famous steps and chit chatting. I was surprised by how packed it was on a Wednesday around 3 PM. I went with my cousin who also needed to go for one of her classes. They have a nice amount of cool exhibits, such as the jewelry exhibition, and galleries to check out from different eras. 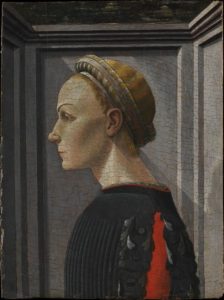 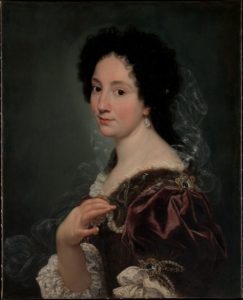 The two artworks that stuck out to me were the Portrait of a Woman by: Giovanni di Franco from the 15th century (image on the top) & another by: Giovanni Battista Gaulli from the 17th century (image on the bottom). Generally, Baroque art is more dramatic and emotional than Renaissance art. The similarities between these two art pieces is that a woman is the center and focus and that’s why I chose it. I wanted to choose two artworks that had some sort of similarity. The first portrait of a woman has a more serious face, while the other has a little smirk, showing more emotion. The woman in the Baroque art piece has jewelry on her silk dress and she’s wearing earrings. On the other hand, the portrait of the woman in the renaissance art piece has a more plain dress on and isn’t wearing jewelry. Another thing to point out is that the woman in the Baroque artwork has more of a real-life skin tone, making it look like it’s a picture taken from a phone. The colors used in the Baroque art piece are more brighter compared to the Renaissance art piece. Overall, the main difference between the Renaissance and Baroque is that Baroque art has a more dramatic vibe to it and it is more striking at first glance.