When examining sculptures throughout various eras of art, it is now evident that many are nude. The nude is a significant part of art and it’s implications are just as significant, especially in Greco-Roma/Western art. However, it appears that more often than not, there are more male nude figures than the female figures, which poses the question of why this is. Further exploration of nude sculptures from the time periods prove that there are in fact many differences between the nude sculptures of men and women.

The emergence of the nude became more frequent in ancient Greek art. In the art from this decade, we see various different nude male sculptures with the ideal male body because the Greeks, unlike other ancient civilizations, did not associate the nude with indecency and weakness. These sculptures have athletic bodies and this was done as a way to signify everything the people of that time valued the most, such as, success, power, strength, and glory. The Greek youth already spent time in the nude when training or competing in athletic events so the nude was natural for them. In his book “Greek Art: From Prehistoric to Classical: a Resource for Educators” Michael B. Norris states that the Greek associated being in the nude to “heroic excellence.” For example, for my project one of the artworks I looked at was the 1st-2nd century Roman copy of the Marble statue of the Diandoumenos by Polykleitos from 430 B.C. that can be found at the MET. The statue depicts an athletic youth tying a fillet around his head; the MET’s description of the statue states that “the position of the feet- poised between standing and walking- gives a sense of potential movement,” which shows that the artists cared to show that the statues didn’t just have athletic figures but was actually moving and participating athletics. There are various copies of this statue and they imitate Polykleitos’ original portrayal of the male body because Polykleitos paid careful attention to his statues’ body parts, proportions, and stances. This is done not only to make the figures accurate but to help the audience get a proper sense of the heroic strength the statues are meant to exude. Norris also explains the importance of a well-proportioned body by stating that a “perfect proportioned, well-trained body was considered an outward manifestation of the striving for excellence that marked a hero.”

Most nude male statues do not shy away from illustrating the details of the male genitalia. However, when it comes to female nude statues it is the exact opposite. From all the different female statues that I examined, none of them were explicit with the detailing of the female genitals. This can be traced back to the fact that many viewed the female nude as a symbol of sex and sexuality and viewed that as shameful if it was not focused on fertility. For years, the female body was not shown in the nude unless it was the Goddess of Love, Aphrodite. This only started after the Aphrodite of Knidos by Prexiteles was created and became one of the very first sculptures of a nude female, setting precedent for other female nude sculptures. Nonetheless, breasts were not as taboo and are shown more commonly. The marble statue of a wounded Amazon (found at the MET), for example, shows an Amazonian woman with an injury under her right breast, while the other breast is covered with her clothes. Another example is the Marble statue of a Seated Muse, which shows a muse sitting on a rock. While her breasts her exposed, the lower half of her body is covered with clothing.

For my project I chose to create a collage of various sculptures in the nude. In my collage, you can see the differences in the depictions of male genitalia versus the female; one is almost always more detailed than the other. The male’s perfect athletic bodies are also shown and the females’ breasts are visible in all the artworks shown. The differences between the bodies of men and women in sculptures is evident when look at art. The power of art is that we can get a message across just by showing, so rather than using words to compare the difference between Michelangelo’s “David” and a statue of Aphrodite, I chose to juxtapose the numerous female and male statues in a collage as a good way to look into this. 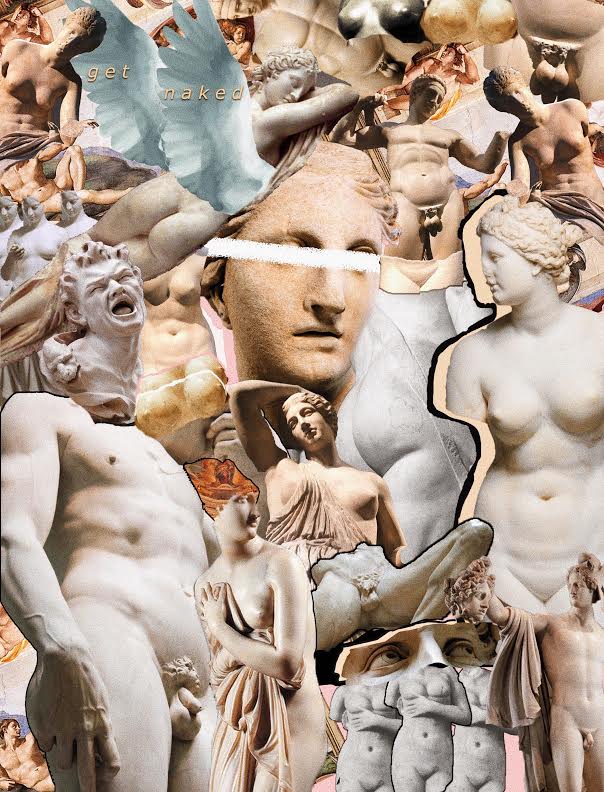