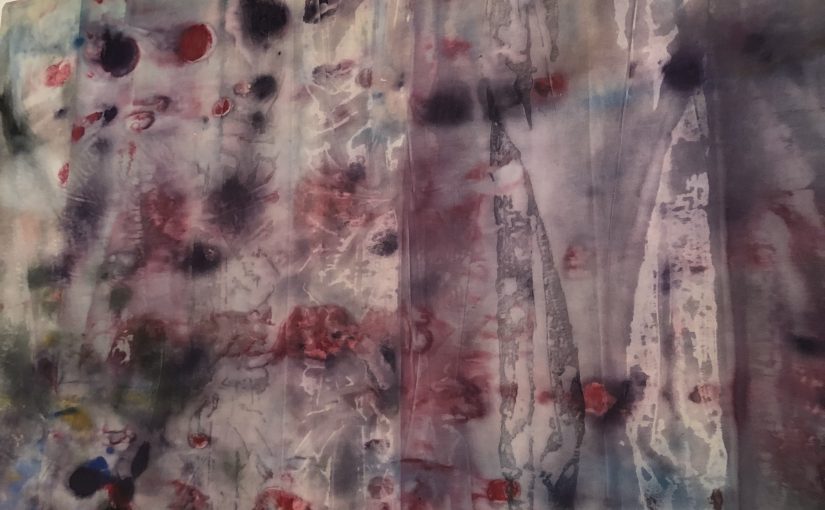 While I found my ventures in the Ancient World exhibit of the Brooklyn museum to be knowledgeable and enjoyable, I found myself eager to reach the second part of this assignment. I already knew that in exploring the Soul of a Nation exhibit of the Brooklyn museum, I was going to gain a better understanding of the mental and emotional labor Black American artists poured into their art two decades after 1963 (an integral time period in American history for the black community). Considering the times we live in today, it is so important to support Black American artists and have an open and accepting environment where  their art is allowed to flourish and where their stories are their own, told through their voice and their voice only.

The piece that struck me the most was Sam Gilliam’s painting, April 4th. In using formal analysis to assess this powerful work, we’re all inclined to first take note of the size of it. I don’t buy picture frames and I’m not good at math, so my words will have to do the size of the painting some justice. It is colossal, taking up a good chunk of the museum’s wall. It was the first painting I had come across while walking through the exhibit and I had to stop. The size itself tells us something about this piece, that the emotions that have inspired the painting are far too big to hide, the loss it’s suggesting is not only a prominent one but a poignant one. Gilliam used acrylic paint in this particular work of his and the most prominent colors seen are purple, red, black and white. All of these colors work together to further invoke feelings of sadness, loss and, even before reading what exactly this painting commemorates, violence. When honing in on the red blotches, which look like blots of blood, the violence is expressed in shapes that look like bullet wounds to me. It is a beautifully composed mess. It almost looks as though the colors are melting into one another (almost like painted rain against a windowpane), but not enough so that you can’t address each of them a purpose of their own. When reading about this piece further and educating myself on where Gilliam’s piece is derivative of, I discovered this work is in homage to Martin Luther King Jr. on the first anniversary of his assassination. The colors of the painting reaffirmed my initial response of it being a melancholy piece that encapsulates loss and violence. The purple can be seen as a magisterial and the red marks (as I had suspected) might suggest bloodstains. The coupling of the two colors pay a respectful homage to Martin Luther King Jr. and appropriately address the loss (of not only who he was but who he represented for the black community) as tragic and detrimental. While the red blood splotches don’t monopolize the painting, they are there and representative of M.L.K.’s own fatal wound shots, the blood that will never wash away because they are stained on the hands of the U.S. government.