The Differences Between Renaissance and Baroque Art

Renaissance and baroque art are often viewed as similar. This could be because both eras were good at using realism and according to Renaissance Art vs. Baroque Art: Understanding the Difference by lee down “Both styles use vivid, evocative pigments, and, what is perhaps most vexing is that, where subject matter is concerned, both eras have strong emphases on topics from the Judeo-Christian Bible or from Greco-Roman mythology.” Another reason why they were sometimes similar is due to the fact that Baroque artist would recreate Renaissance art. Although the art was sometimes similar there are various important differences that make each era unique and help us differentiate them. Here I will be discussing the differences between the two era’s art. For the Final Project I chose to do prompt number three the Creative project. While doing the Met assignment I found myself very interested in the differences between Renaissance and Baroque art that I decided to make my final project thesis on it. I researched both time periods, read and watched videos on how they differed and analyzed various paintings and sculptures as well.

The Renaissance began in the 1400s and ended in the 1600s. It was a very important time period for it brought about many new things and was known as the rebirth. There was a shift of focus to humanism which means there was a greater importance placed on humans rather than divine beings. The Renaissance was also known for its many artists. Like Brunelleschi who founded linear perspective which gave gave depth to 2D art with the use of the Vanishing point. He was also known for creating the dome in architecture. There were various other great artist known from that time such as the famous four Michelangelo, Raphael, Donatello, and Leonardo.

The Baroque era began from in the 1600s and lasted till the 1700s. Around this time the Catholic church was undergoing changes with the Protestant Reformation taking place. As a result the catholic church felt a new way of biblical art was needed in order to keep and counter the Protestant reformation so art became more forceful, emotional and had greater realism. Which was also found in Protestant art and other European countries.

With the focus on perspective and adding depth in Renaissance art the paintings and sculptures would often lack emotion and appeared to be still. Renaissance art focused on stability with pyramid shaped compositions or the use of vertical and straight lines. While Baroque art emphasizes emotion and was known as dramatic. Baroque art used emotional intensity, dynamism, diagonals, was involving, real, interrupted contours, movement and had direct focus. For the creative aspect of the project I recreated two different Davids. One was based on Michelangelo’s David 1501-4 which was from the Renaissance and the other was based on Bernini’s David, 1623-24 from the Baroque era. Although my drawings were based on two different full body sculptures I drew the faces or focused on David’s portrait yet tried to convey the different styles from both periods. In Michelangelo’s sculpture David is more straight and vertical with some contropasto he shows some emotion but it is more eternal as opposed to Bernini’s who looks like it is a moment in time with a look of anger and concentration. Bernini’s David also has diagonals and appears to be moving more dramatic. 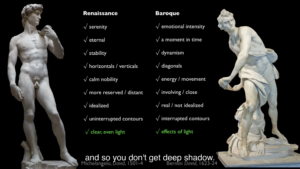 Sculptures I based my Drawing on 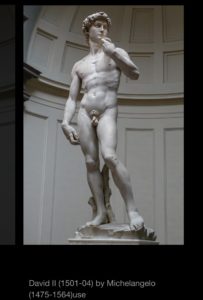 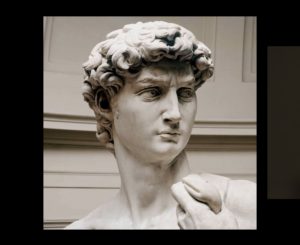 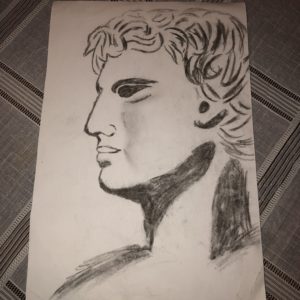 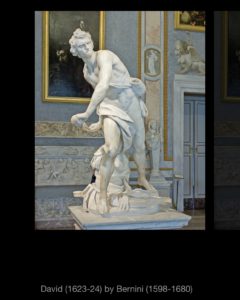 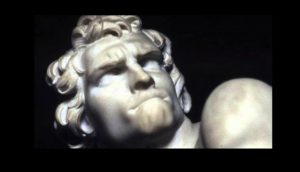 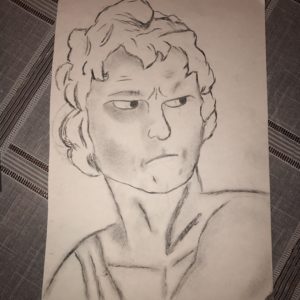