Humanism is a cultural and intellectual movement of the Renaissance that emphasized human potential to attain excellence and promoted direct study of the literature, art, and civilization of classical Greece and Rome. 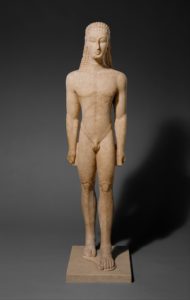 Greek humanism is the beauty of the human form and essence. It puts the human experience at the center of events. In this statue of the Doryphoros is shows an adult male body with a muscular somewhat bulky body with a blocked shaped torso. The positioning of his feet are in a stance where one leg takes all the weight of the body and the other is merely a support. In this position he is standing in a relaxed state in which he can look around him easily without breaking form. On the other hand Kouros is a teenager or young adult standing in a symmetrical pose. He has a defined body which seems more realistic than Doryphoros and  a calm posture.

In Roman humanism statues were more symbolic and focused on singular characteristics likes the face or body. In the Marble bust of a man sculpture it shows an elder aged man with a serious look on his face. Usually in Roman sculptures they depict signs of aging and reflecting on the character of the individual where as in Greek sculpture it shows the youth and strength.