Humanism is an outlook or system of thought attaching prime importance to human rather than divine or supernatural matters. Humanist beliefs stress the potential value and goodness of human beings, emphasize common human needs, and seek solely rational ways of solving human problems.

Greek Humanism also refers to the Greeks’ emphasis on the human body: on physical beauty and athleticism;  the Greeks see physical beauty as literally “divine”, as godly. For the Greeks, all people can and do communicate with a god or gods; these gods exist very much in the real world, taking on the shape of humans, and even often having sexual relations with humans. This physicality reinforces the belief that human physical qualities are themselves an element of the divine.  If the gods look like us, then we look like the gods; thus, our bodies are godly.

It was in the philosophical, artistic, and political writings of the ancient Romans that they found inspiration for their own move away from traditional religion and otherworldly philosophy in favor of a this-worldly concern for humanity. Rome was practical, not mystical. They were primarily concerned with whatever worked best and whatever helped them achieve their goals. Even in religion, gods and ceremonies which did not serve a practical purpose tended to be neglected and ultimately dropped, which added to the idea of humanism.

Unlike ancient Greek and Roman art, Mesopotamian and Egyptian art were meant to glorify the gods and the king. Greek and Roman art are different from Mesopotamian and Egyptian art as you can see in the pictures below. On the right is a Greek sculpture of a human man. He is shown to be very strong and masculine and shows off his body. On the left is a Mesopotamian carving of a god-like creature. Its a humans head on an animals body with wings. As you can see the two artworks are very different and focus on different ideas. 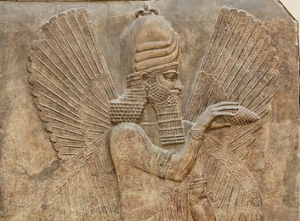