For my formal analysis of art from the ancient world, I chose to focus on “Painted  Coffin Interior” 1070-945 BCE.  To begin with what we discussed in class and how this piece relates to our discussions, we can see that this coffin interior uses different registers to section off certain parts. The thick, light blue lines act as the registers divider, and the light blue is the most prominently featured color. Along with the light blue, there is white, dark green, gray, and black used. Also featured is a diamond pattern on  king Osiris’ legs, and semi-circles used for his torso. King Osiris is the central figure, taking up a majority of the coffin’s interior, and the largest in scale in relation to all the other figures depicted. The images of birds is repeated often throughout the registers, some of which have human faces. Next to many of the birds looks to be fruit, specifically grapes or berries. Like many pieces of Ancient Egyptian Art there is an ohm featured on the second register from the bottom. By the King’s feet we see a depiction of Anubis and another animal-type creature supporting the King’s legs. The King is also holding a striped staff or cane, across his chest. A heavily repeated image is the reddish circle with the white outer rim. It is repeated over the king’s head, at the very top of the coffin, and there are four that surround the kings torso. At the very top, it is unclear but it looks like two eyes are painted, perhaps to watch over the deceased in the afterlife.

A piece of art that spoke to me instantly from the soul of a nation collection was Wadsworth Jarrell’s Black Prince. It depicts a colorful and powerful image of Malcolm X holding up a finger. What I was immediately drawn to was the intense palette of red the artist used. Next to this painting were several other paintings also using vibrant and passionate reds to “drive” the art. After exploring the entire museum i found the soul of a nation collection to be the most striking and powerful. This piece, like many of the pieces in the museum, seem to represent the ongoing struggle African Americans have had in this country. Malcolm X is one of the most recognizable African American leaders in the past century so to choose him as the subject was very poignant. As mentioned the intensity of reds drew me into this painting but once closer, standing a few feet in front of the art, the painting took an entirely new dimension. The artist used hundreds of recurring “B”s to shape the painting, and repeating B words such as Black, Beautiful, and Bad. Along with all the B’s there is Malcolm’s X famous quote about using any means necessary. The quote hangs around X’s chest almost like a pendant or necklace, worn as a badge of honor. A small detail that I believe to be important is that the colors extend beyond the border of the painting. There are dots and splashes of paint beyond the white border, breaking through frame. 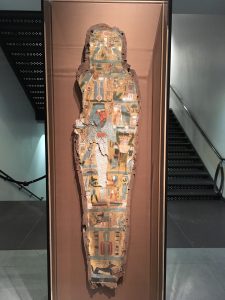 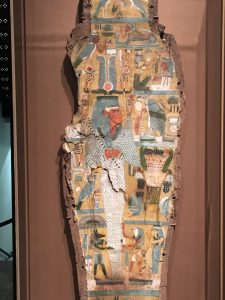 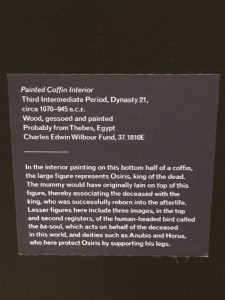 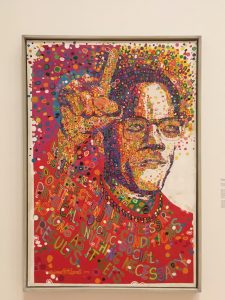 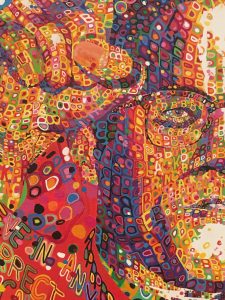 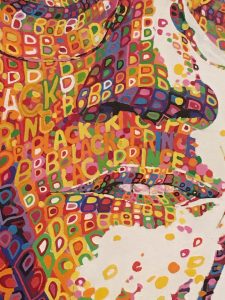 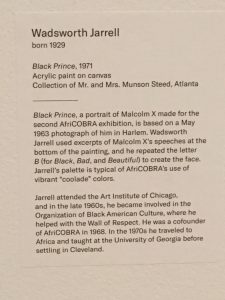 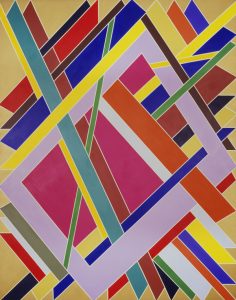 William T. Williams, Trane, is an acrylic painting that is rich in color and geometric abstractions. The colors included are red, grey, lavender, dark pink, yellow, navy, dark red, bright red, orange, light green, dark green, brown, brownish-beige, and black. Thin white lines separated every shape as they intertwined with one another. The geometric abstractions show the tension between the colors and forms and tests the limits of the other colors used during the intensive work process. Each shape ends with sharp points, and the colors make the shapes bolder as they fill up most of the paper. The pink shape in the middle seems almost trapped, surrounded by so many other geometrics pointing in different directions. I chose this artwork because the colors were bold, bright and to me, it is screaming a strong message. I thought it was very creative that I wanted to see the artist’s name. When I saw it was William T. Williams, I was surprised because I learned all about Williams in middle school, but I never saw this piece. Trane relates to the rest of the exhibit because each artist was of color and practiced art during 1963-1983, where those artists were able to individually create different kinds of art that reflect upon the movements of the time period. Each artwork tells a strong story and captivates the viewer to want to learn more about it. 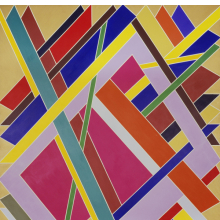 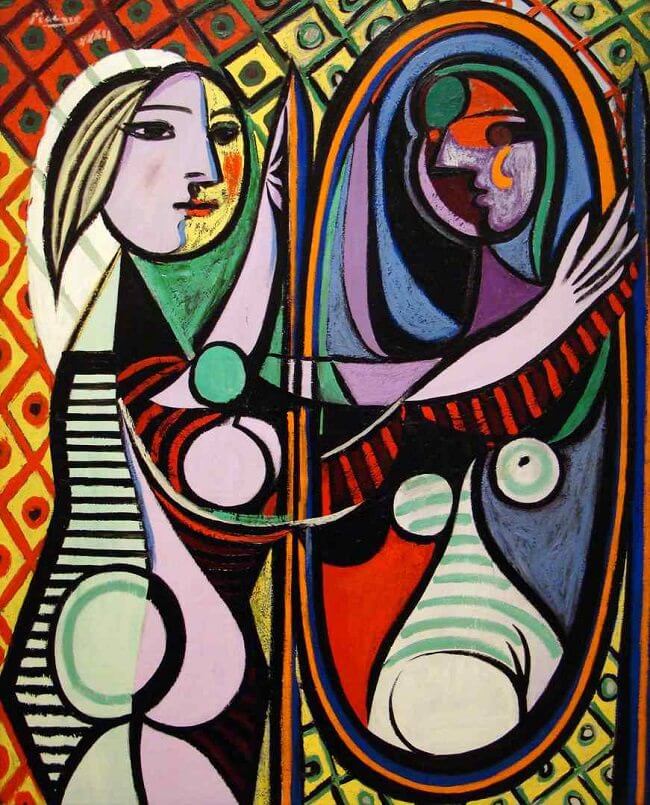 This artwork seems to look interesting to me somehow because of its colors, lines, and shapes. However, this artwork was by William T Williams was an American abstract geometric painting. Williams included the colors red, blue, yellow, pink, purple, green, black, brown, and orange. Not only his colors were outstanding but also the shape of the line, such as thick and thin line, big and small shapes. The line of the shape or sharp edges were all connected together. Mostly, the shapes were squares and rectangles.

I can compare the artwork to another famous painter named Pablo Picasso. He was  spanish painter and I used to learned about him in my art class.  This artwork was called”Girl Before A Mirror” Although he uses different techniques to design his artwork. However, he drew a mirror reflection with some black line pattern, circles as the body parts, black and white triangles as the chest and all different colors on the faces, hair and body. It actually shows a figure of a girl with an emotional feeling while the other artwork does not but only with a geometric shape.

P.S — The picasso painting was not in the museum, I just wanted to talk about the connection between them that I found it interesting. 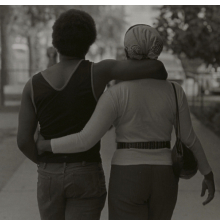 I was honestly very moved by the ‘Soul of a Nation’ exhibition. As the name suggests, the exhibition did portray the soul of this nation during a time period where African Americans were so contested and resilient. The exhibition really portrayed a realistic view of the conditions of African Americans through the disparate artwork of more than sixty Black artists. Among some of the most beautiful pieces of artwork, the Couple Walking photo captured by Roy DeCarava stood out to me mainly because of its realistic portrayal. The photograph spoke volumes about the sense of comradery, resilience, and companionship among the two subjects. However, in light of the movement and change that was occurring for the African American community at the time, I think this photo further represents a union and love shared among the suffering Black communities all over America. Though it is a black and white photograph, there is a warmth that welcomes the observer to think about the man and the woman faced away from the camera, holding tightly onto each other. They seem to be waking away from the camera and the scene captured almost candidly by the photographer. The man in the photo is wearing a sleeveless shirt with jeans, and the woman wearing a head scarf, and formal attire. Though kind of contrast in their clothing style, their love and adoration for each other become expressed through their arms which surround one another. For me, looking at this photograph this couple seems hopeful as they walk through a historically, politically, and socially relevant time period in America. I feel hope not only for the couple but, also the African American community as they walked together holding arms in a fight for equality and justice.