Art of the ancient world is an expression of the different cultures. The way the statues and art are made differ depending on what the culture deems important. For example, Mesopotamian and Egyptian art focus on Gds and Deities. While Greek culture is entirely different their art focused on Humanism. The idea that humans play an important role in society. This Humanistic belief is carried on to Roman culture with slight differences in the nuances.

Mesopotamian and Egyptian art are both very expressionless and their figures are formed in a way that makes them seem aloof. They lack the curvature of a natural body and their figures lack movement. Formal frontality is used to describe the forward facing stance of most Egyptian sculptures. Most sculptures were used for ritual purposes often their hands are clasped and eyes wide which represents their attentive attributes towards the Gds. Ready to listen, pray, and perform for their Gds, all for the purpose of an afterlife. You can see in the image of King Menkaura his and Queen that although they have one forward in a sort of motion the rigid positions they are in lacking

the feeling that they are realistic.

The art coming from Greek culture takes a completely different turn from what we know Ancient art to be from the Egyptians. They introduced the idea of Humanism, Where people were not a nuisance to the Gds as previously believed rather an important and vital role. The Greek period is divided into four stages; Geometric, Archaic, Classical, and Hellenistic. The Geometric and Archaic art more similar to the Egyptians as depicted in the sculpture of the Kouros. They imitated their marble carving technique and the sculpture stance is similar to what we already know. The Classical and Hellenistic period is where Greek art gets most of its fame. Their sculptures represent an authentic version of the human body. Trying to imitate and even idealize what humans are meant to look like. Their fame for little or no clothing and the Olympics further show their appreciation for humans. Even their Gds have human 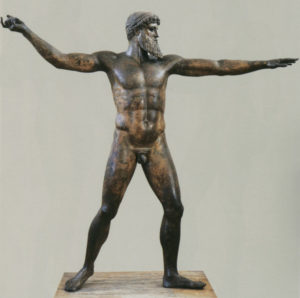 characteristics, unlike Egyptians. As seen in the Bronze sculpture which is believed to be the Greek Gd Zuess (missing his lighting bolt) looks to have a completely human with unrealistic and idealized features. The Greeks were also famous for introducing contrapposto pose that many sculptures have which shows philosophical thinking and are meant to make the sculptures come to life.

The Romans continued this Hellenistic belief and their sculptures furthered this idea by making them even more Naturalistic. The sculpture of Augustus the first Emporer of Rome has many fine details including the Gds portrayed on 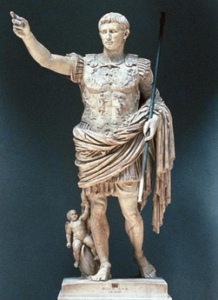 his armor. Although he was meant to be a fierce warrior his muscular build doesn’t stick out as unnatural rather a more relatable strength. A common representation of Roman art is Portraiture. It shows the fleshy naturalistic style the which was most common in their culture. They often used Portraiture for ancestry worship and had large funerary processions displaying ancestors.