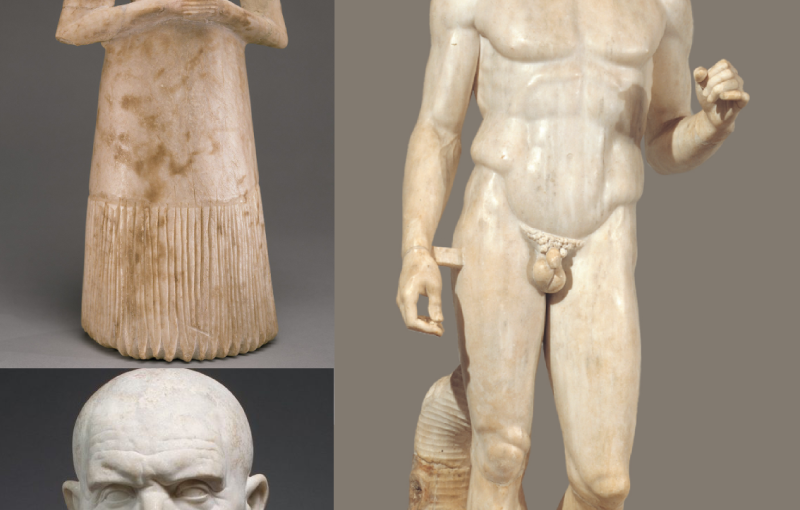 In Unit 2, we  learned about art from the Ancient World. This includes art from Mesopotamia, Egypt, Greece, and early Rome. Their styles of art varied greatly in some ways and insignificantly in other ways. I’m choosing to focus on Mesopotamia, Greece, and early Rome, although Egyptian art is similar in some ways to Mesopotamian and Grecian art, in different ways. The Mesopotamian art focused more on function than it did on form, so its sculpture of the Sumerian worshiper did not have naturalism to it. Although it had general features of a person, its eyes were exaggerated to be enlarged, its hair was fancier than natural for a person, and it did not have many human details in its features. Greco-roman art differed in this aspect greatly.

Greco-roman art had a lot of humanism in it. Both the Doryphoros and the Bust of a Roman portraiture had a lot of details that made them appear as though they could be in the room with you. The Doryphoros had good proportions and one can see that the Greeks had a good eye for detail in his knees, torso, and arms. His face was a bit idealized, however, and looked a bit ‘perfect.’ The Bust of the Roman looked like an individual that you might run into on the streets. His expression was very clear, and there were details specific to him in the sagging of his cheeks and chin.

The Grecian art and the Mesopotamian art both shared a sense of idealism in the way they made their art. The art was made to idealize aspects of the sculpture (for Mesopotamia, it was the function of faith idealized; for Greece, it was the young human male body idealized). Roman art, on the other hand, cared not for idealizing what it portrayed, but in capturing the true look of the person who was being sculpted.

Unlike Mesopotamia and Rome, Greece actually did not use stone to cover the Doryphoros. They used bronze, but the only thing left of this work of art, was the marble copy that Rome created to celebrate the Grecian art. This shows each cultures’ preferred medium for creating works of art.

Interestingly, of these three works of art, the hairstyle is not consistent. In fact, as time passes, the amount of hair sculpted actually decreases. The Mesopotamians clearly valued hair for it is highly aestheticized. The Greeks clearly did not for there is very little detail put into the hair (even though they are clearly capable of doing so). The Romans did not care for it either, but only because the man they were sculpting did not have hair (and they wanted to portray the man as he actually was in real life).