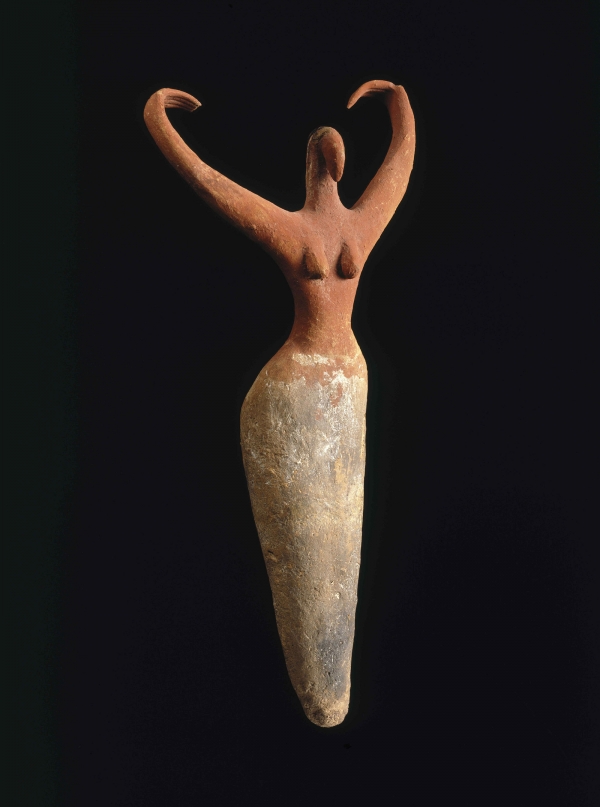 From the Brooklyn Museum I chose Bird Lady figurine from the Predynastic Period 3500-3400 BC. This pottery was made during the Badarian period (4400-3800 BC) and was named after the village of Badari where it was first found. My first impressions were the subtle details that stood out. First, the shape of the body and arms are curvy which gives off the portrait of a feminine body. Her hands are in the air giving a peaceful vibe as if she was dancing or celebrating in joy. In deeper look, her face and arms resemble the beak and wings of a bird along with her legs which aren’t there as it was a tail. There can also be another meaning since she is so bird like it can resemble freedom or flying. Back in Ancient Egypt women didn’t have many rights. This figurine can represent what women wanted to achieve or feel like because their was a hierarchy where women had to listen to obey men.

The Bird Lady has body parts of both a woman and bird. Another aspect I saw was the two toned color. The top part of the woman has a copper like color which could be made up of clay where the bottom has a sandstone color which makes it look like a rock. The bottom half of the figurine can also resemble a dress or skirt. What shocked me the most was the nudity shown on the upper body because I wouldn’t expect ancient Egypt to include it in art. 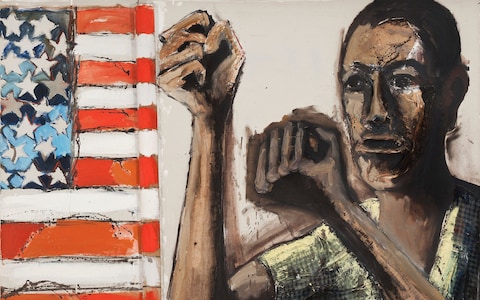 When I browsed around the Soul Of The Nation exhibit, I stumbled upon this painting that caught my attention. This artwork, Did The Bear Sit Under a Tree, by Benny Andrews spoke to me with such intensity. The first thing I noticed was the sloppiness in the execution. I saw that there were multiple colors on the flag and man. For example, the stripes are red and orange and the stars have a light and dark blue background. Also, the entirety of the flag is filled with flaws such as imperfect sizes of the stars followed up with cracks in the stripes. The flag also seems to be rolled up away from the man as if he is fighting for something against what the flag represents.

The colored man’s facial expression shows confusion or an undecided look along with anger. His hand gesture clearly shows he is ready to fight or resist against the flag. Meanwhile, his face expresses uncertainty and indecisiveness whether or not to carry out the action. Regardless, the flag is rolled up covering about a third of the portrait as the man  is pushing it away from him. The caption for the painting is a representation of a colored man during the civil rights movement with a shaking fist at the flag which was supposed to protect him. The painter portrays a sense of betrayal and anger in the man because of his unhappiness of how the United States treats colored people.