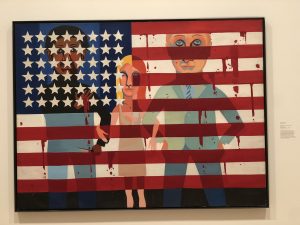 Although, I was anticipating all of the works I would encounter at the Brooklyn Museum, I was most interested and excited to explore the Soul of a Nation exhibit. This is an exhibit that now holds a special place in my heart after experiencing it and getting to see the work of many Black artists and the different depictions of blackness across the US (NY, Chicago, L.A.). One of my favorite parts was all of the work depicting the Black Panthers and their movement. I’ve always had a fascination with the Black Panthers movement because of the stories my dad would tell about them and things he experienced growing up in the era of their movement.

Although, this part of the exhibit was something I was increasingly interested in, I found myself instantly drawn to this painting of the American Flag, named American People Series #18: The Flag is Bleeding, 1967 by Faith Ringgold. I went back to this piece about three times, each time finding some new meaning and new emotion in regards to it. I chose to post this piece because in this recent political climate and over the past few years, more and more people have become vocal about the oppression faced by Black people everyday. In this work, it depicts that in America we all stand united and in solidarity, but in reality once you look beyond this stance it can be seen that that isn’t the truth. The oppression of Blacks had never diminished and as said previously, can still be seen today. This piece relates to the rest of the exhibit because the main focuses of it are discrimination and oppression, and the Civil Rights Movement that fixated on fixing these problems. This piece embodies both discrimination and oppression of Blacks, even though we are all given these rights under the Constitution and should be united from it, African Americans had a small chance at escaping oppression and discrimination. The colors of this work are vivid and saturated, which instantly draws your eyes to it and makes you begin analyzing it. Also, shading and shadowing are used to clearly show facial features. The color that draws your eyes in the most is the red, which is used for the stripes on the flag as well as the blood that is dripping from those stripes, once again showing not only emotional pain, but physical pain.